Home | About Us | Partners, Donors & Sponsors

In our 20 years as a nonprofit, we have built strong partnerships with organizations serving under-served and at-risk youth in the Los Angeles area. We are continually looking for program partners to collaborate with to expand our specialized arts instruction. For more information on how to become a program partner please email info@hollywoodheart.org.

Hollywood HEART is thankful for all of our generous supporters, including:

The California Arts Council, who works towards advancing California through the arts and creativity.

The International Society of Hospitality Purchasers supports us in its annual fundraising event. With over a decade of partnership, ISHP has already donated more than two million dollars to Hollywood HEART. Because of the generous support and enthusiasm of the ISHP, we are able to continue our efforts to enhance the lives of youth impacted by HIV and AIDS.

Created by Mattel and the Mattel Children’s Foundation, the Joseph A. Cristina HIV/AIDS Children's Fund makes a difference in the lives of children affected by HIV/AIDS in the United States by helping to meet their diverse needs, educating and advocating on their behalf, and bringing joy and fun into their lives.

HBO joined Hollywood HEART as a sponsor at the REWRITE level for the 2019 SCRIPTNOTES event at The Theatre At The Ace Hotel!

Protravel International is the most respected agency in the industry, holding the highest standards for personal and corporate travel planning since 1984.

The Tarbell Family Foundation is a private foundation that supports various left-of-center, educational, and general-aid organizations.

The Dominguez Firm, LLP stands for excellence in legal services. We value the dignity of the individual. We uphold the firm’s legacy of compassion, service, and results.

We are so grateful for our incredible network of supporters from the business and philanthropic communities, including: 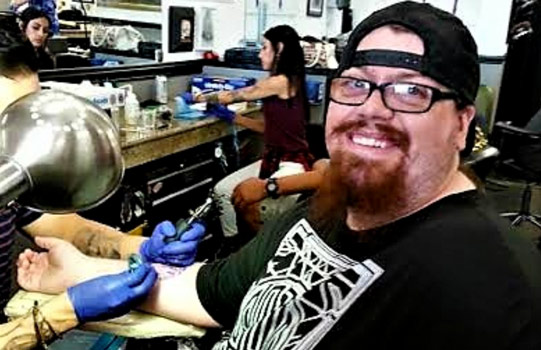 Cameron wanted to help kids less fortunate than himself. A brave desire after facing his own challenges and just one example of his kind heart. Cameron was bullied by peers for his epilepsy and learning disabilities and found out only after he was grown that he had Autism.

Through the arts, Cameron was able to overcome these challenges and began his artistic journey under the wing of an art instructor, Antonio. At Michael’s craft store, Antonio partnered with Cameron on his homeschool projects and soon Antonio became an integral part of Cameron’s homeschool curriculum. With the support of the arts and a compassionate instructor, Cameron’s artistic talents began to blossom along with his self-esteem.

With his newfound confidence, Cameron had a bright future ahead of him. He created many paintings and even his own techniques for coloring pictures in graph paper. He even ended up teaching this technique to an elementary class as a volunteer! On October 29th, 2016, just three days before Cameron’s 25th birthday, all were devastated to learn that a long, undiagnosed illness was cancer. He was called home that same day.

In honor of Cameron’s courageous journey, Hollywood HEART is honored to be home to the Cameron Saner Memorial Fund. This fund will provide kids in need with arts workshops that will share the healing power of the artistic process, build confidence and self-esteem in young people, provide opportunities for a successful future, and in many ways, give hope to those struggling.

Join us with a gift in Cameron’s honor.